Hey.
It's been a while.
Aside from a very busy period in my life and at work, I've been missing Doom Patrol. There hasn't been much to say about this wonderful series that hasn't already been said at Doompedia, other blogs, or on websites. And not much news on the horizon, aside from an upcoming, out-of-continuity appearance in Tiny Titans (courtesy of My Greatest Adventure).
However, today, Keith Giffen has had more exposure than what he received for Doom Patrol in the last 2 years! His OMAC series has been the focus of interviews at Newsarama and Comic Book Resources, including the following snippet (the only one) about Doom Patrol:
Nrama: I also wanted to ask you about the cancellation of Doom Patrol, because I really loved that book.
Giffen: Well, you seem to be the only one. No, I'm kidding. I know a lot of fans loved the book and I obviously enjoyed doing it, but I'm really excited about what I'm doing now.
Nrama: Your fans have voiced a lot of concern about the fact you're not writing anything for DC, especially now that Doom Patrol is gone.
Giffen: Oh, no, they shouldn't worry. I haven't walked away from writing. I'm not really able to talk about any of that right now, but you'll be hearing about a couple things coming from me as a writer at DC.
In other news, I've been very fortunate to win the following items off eBay (something I never thought I'd own, living in Australia): 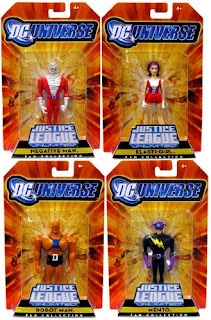 Before you do anything else........... Read this.
It's a blog post, by tamaranorbust, from the DC Message Boards. If you're a fan of Doom Patrol, then you'll love this article. An absolute pleasure to read!
Tam also mentions my Doom Patrol iPetition, which is approaching 500 signatures. Can we get there? Make sure you've signed it (no donations required), and let your DP-reading friends know, as well! 500 signatures would be a great achievement, and hopefully one that DC will take notice of!
And for some more reviews of the final issue of Doom Patrol, enjoy the following:
- Comic Book Resources (Doug Zawisza gave it 3.5/5)
- Multiversity Comics (9/10)
- Comic Vine (4.5/5)
Posted by Petar at 11:21 PM 5 comments: 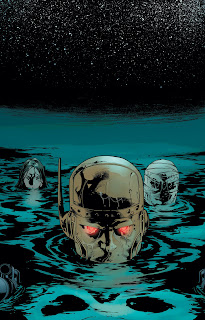 Well, it's finally here. The issue we've been dreading. But without a doubt, I can say that Giffen went out the best way he could - with a laugh.

The issue wrapped up what I'll probably look back on as my favourite Doom Patrol run ever. It had the original characters, humour, characterisation, action, weirdness and all the other things that have developed from Arnold Drake's original vision.

It also had the laugh-out-loud moment of the year, with Ambush Bug having a private conversation with Veronica Cale/Mr Somebody about Flash-something........ I honestly can't think of a funnier moment from Giffen's run.

I won't say much in the way of spoilers - but check the issue out for yourself. And based on that rather open ending, it looks like Doom Patrol may not be that far away in the future. Here's hoping.

Congratulations to all involved, for a wonderful, interesting, hilarious and entertaining comic series!

(And don't forget to check out Mart's review at Too Dangerous For A Girl!).
Posted by Petar at 11:41 AM 3 comments:

Here it is - the final issue!

Comic Book Resources has a preview up already. (Great to see Crazy Jane and Danny again!)
Posted by Petar at 4:56 AM 1 comment:

Hey guys - it's been a while. Not much Doom Patrol news floating around, with the final issue looming. Here's hoping they go out with a bang! Or not...........
Here's a great review from regular DP-reviewer, DangerMart:
Too Dangerous For A Girl!
Posted by Petar at 12:03 AM No comments:

In the last week, I've read three excellent reviews of Doom Patrol #21, the Robotman spotlight. The reviewers clearly 'get' the issue, and understand how Robotman's drive is connected to the Doom Patrol in all it's incarnations. So please have a look at:
- Comic Book Resources (Doug Zawisza) - 4 out of 5 stars
- Comics Bulletin (Shawn Hill) - 4 out of 5 bullets
-  Weekly Comic Book Review (Minhquan Nguyen) - B+
And if you haven't signed the petition to bring back the Doom Patrol, you'll find it at:
http://www.ipetitions.com/petition/savethedp/

(If it asks for a donation, that is purely optional, and to do with iPetitions - not this particular petition).
Posted by Petar at 11:13 PM No comments:

From the July 2011 solicitations:

DOOM PATROL: FIRE AWAY TP
Written by KEITH GIFFEN and BRIAN KEENE
Art by MATTHEW CLARK, RON RANDALL, KEITH GIFFEN and AL MILGROM
Cover by MATTHEW CLARK
In this latest DOOM PATROL volume collecting issues #14-21, the team’s leader, Niles Caulder, experiments on a captured Kryptonian in hopes of gaining superpowers of his own. And the first battle he faces – is against his own team!
On sale AUGUST 24
232 pg, FC, $19.99 US
** With that page count (232 pages), I'm assuming this will also collect #22, the final issue, and possibly the Secret Six crossover issue, as well**

DC COMICS PRESENTS: METAL MEN #1
Written by KEITH GIFFEN, J.M. DEMATTEIS and BOB HANEY
Art by KEVIN MAGUIRE, TIM LEVINS and others
Cover by KEVIN MAGUIRE
Collected from DOOM PATROL #1-7, don’t miss the Metal Men’s adventures against The Clique, living mannequins, an ancient god, at the Department of Motor Vehicles and more. Plus, from SILVER AGE: THE BRAVE AND THE BOLD #1, the team meets Batman, Green Arrow
and Black Canary!
On sale JULY 20
96 pg, FC, $7.99 US
Posted by Petar at 10:48 PM 1 comment: 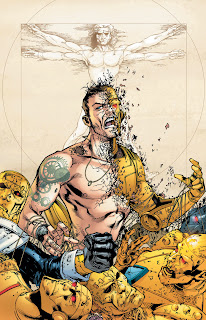 And then there was one.
One issue of Doom Patrol to go, that is. In what has turned out to be one of my favourite comic runs ever (alongside Morrison's X-Men, Preacher, Sandman, Y:The Last Man), I can't help but feel a bit deflated reading this issue, knowing that it's nearly the end. I love the spotlight issues, and the first two were definitely five-star issues, in my opinion.
This issue didn't feel quite as encompassing as Larry's, or as defining as Rita's spotlight. But it did give a sense of sympathy for Cliff, and demonstrated his sense of belonging. Each main era of the Doom Patrol is once again outlined, thanks to the stylish pencils of Matthew Clark (and Ron Randall), and Giffen adds touches to Cliff's origin that show us what *really* happened behind the scenes.
Cliff's visits to Super-Hip over the years also provide a broader scope to Cliff's life. He clearly was out there, tormenting over whether 'one more run' with the Doom Patrol would be worth it. And it's great to see that, in the absence of Larry and Rita, he had someone he could trust. The antithesis of that, is represented by General Immortus' current involvement. Clearly, he is not to be trusted, but it's hard to argue with an ancient guy who is willing to help out, if only to serve his admitted needs.
I know I'll be re-reading this issue many times, as with all of the spotlights, in particular. I can only hope that the final issue will deliver a satisfying ending to a wonderful comic series.
4.5/5
Posted by Petar at 11:46 PM 2 comments:

Check out the first few pages of the Robotman spotlight, courtesy of Newsarama!
Posted by Petar at 11:00 AM 2 comments:

From the C2E2 convention:
"Some of the things we've done, is we've actually cancelled a bunch of books that were on the cusp and weren't working as well for us because we wanted to basically have people focus on what we feel matters most right now , the changes that take place in the Flashpoint universe."
Well......that's disappointing. So Doom Patrol was 'on the cusp', and perhaps not yet in cancellation territory. This is supported by the recent increase in sales due to the Secret Six crossover. However, in order for us, the fans, to focus on Didio's new 'project', he's going to take Doom Patrol (and other series) away, so that our favourite comic doesn't interfere in our spending on Flashpoint. What about what matters to the fans?
I'm not sure if Didio is aware of how that came across, but if anything, it's put me OFF Flashpoint. A year ago, I was buying about 7 DC Comics monthly. Once Flashpoint hits, the only DC Comics I'll be still buying are Green Lantern and Thunder Agents (which has had lower sales than Doom Patrol).
But there is a positive from C2E2 - Matthew Clark has moved to Marvel onto a new Ghost Rider series! GR is my favourite Marvel character by far, and I was very disappointed when the last ongoing, by Jason Aaron, was cancelled. Nevertheless, Rob Williams and Matthew Clark are bringing back hell on wheels - Congratulations, Matthew!! Looking forward to see some full issues of EmCee artwork! See Newsarama for the interview.
Posted by Petar at 9:13 AM 9 comments:

Other sites of interest!

What did you think of Doom Patrol #21 (Robotman spotlight)?

What did you think of Doom Patrol #20?

What did you think of Doom Patrol #19?

Will the Doom Patrol defeat the Secret Six?

What is your favourite Doom Patrol 'spotlight' cover?

What did you think of Doom Patrol #18?

Which Doom Patrol villain would you like to see ASAP?

What did you think of Doom Patrol #17?

What did you think of Doom Patrol #16?

Who is your favourite secondary Doom Patroller?

What did you think of Doom Patrol #15

Who is your favourite Doom Patrol writer?

What did you think of Doom Patrol #14?

Who is your favourite original Doom Patroller?

What did you think of Doom Patrol #13 (Elasti-Woman spotlight)?